Cared for by the National Trust for Scotland, the iconic Glenfinnan Monument honours the fallen Jacobite clansmen with a backdrop of spectacular Highland scenery. It’s well worth a visit to enjoy the panoramic views of Loch Shiel, the beautiful mountain scenery and the famous Glenfinnan viaduct.

The monument was erected in 1815 and is a moving tribute to the Jacobite clansmen who fought and died in the cause of Prince Charles Edward Stuart. The raising of the Prince’s Standard took place at the head of the loch in 1745, in the last attempt to reinstate the exiled Stuarts on the throne of Great Britain and Ireland. Less than a year before the Battle of Culloden, Prince Charles Edward Stuart raised his father’s Standard at Glenfinnan, marking the start of the 1745 Jacobite campaign. An army of about 1,500 rallied to join Bonnie Prince Charlie and they marched as far south as Derby before the retreat began that would seal their fate.

In 1815, the 18 metre high Glenfinnan Monument was built with the lone kilted highlander at the top providing a poignant reminder of the clansmen who gave their lives to the Jacobite cause. The monument was designed by Scottish architect, James Gillespie Graham. You can take a guided tour to the top of the monument and enjoy the stunning views that stretch across the mountains out to Loch Shiel. Try and spot the Harry Potter film locations… including the island where the Triwizard Tournament was held! 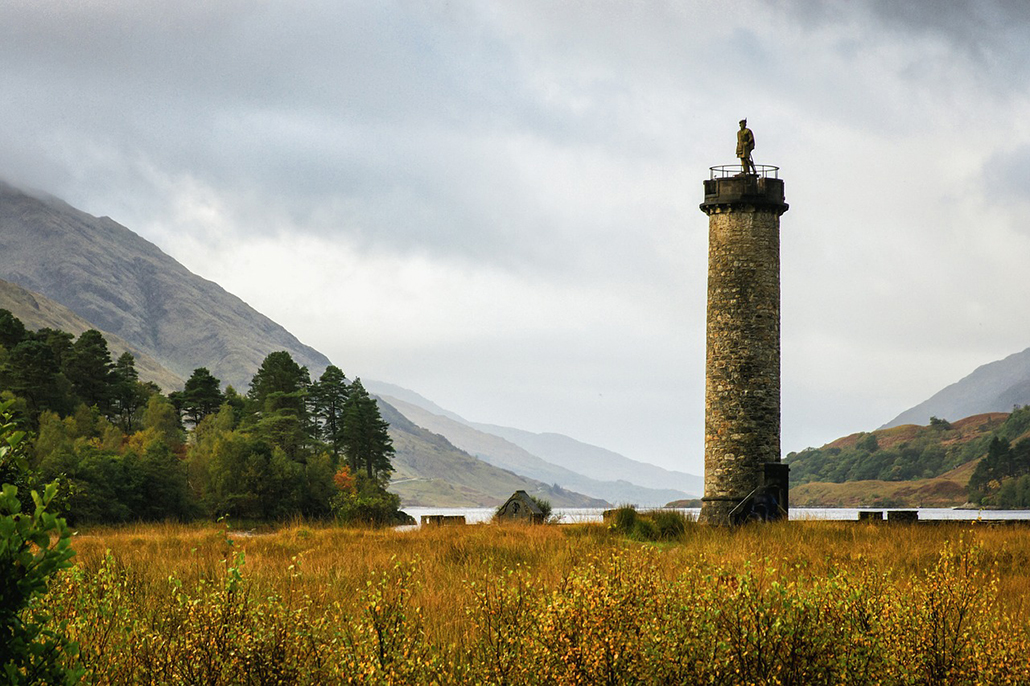 The National Trust for Scotland Visitor Centre displays and an audio programme about the Prince’s campaign from Glenfinnan to Derby and back to the final defeat at Culloden. The modern exhibition in the visitor centre tells the story of Prince Charles Edward Stuart and the 1745 Jacobite Rising. For further information see the visitor centre’s website
www.nts.org.uk/glenfinnan-monument